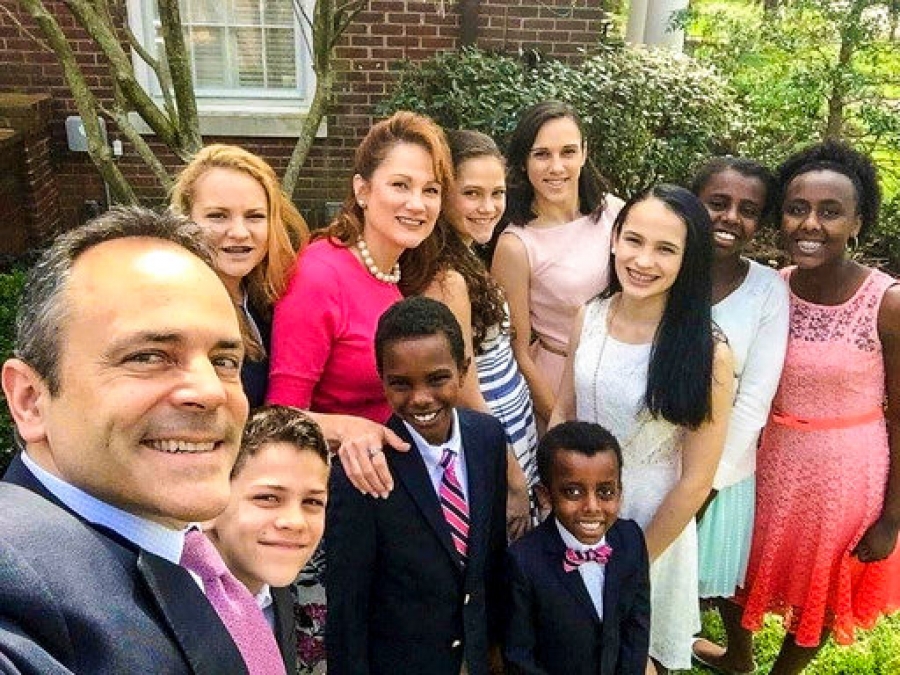 Here’s a great story of the newly elected governor of Kentucky, Matt Bevin, as he takes on major changes that need to be made in his state.  He was a non-politician who saw the need for someone who really cares to stand up and do what is right to make this world a better place.  This time, he’s making changes to better care for orphans.  Go read the whole story by the Associated Press published in Kentucky Today here.

Just look at the photo above of his family, awesome isn’t it?  The Bevin’s had 5 biological children and then adopted 4 more from Ethiopia.  But their hearts were broken one day when their children were playing on a playground and an 11-year-old girl from a foster care group home latched onto their own girls.  They immediately wanted to adopt this girl but were prevented.  The state’s rules were just too strict for the Bevins’ home to qualify – unthinkable!  So they adopted from Ethiopia instead.

But now that he is the governor he has decided to take on the system and change it.  “The judges should not have the latitude to make the decisions that they are making. Because some of them are making terrible, terrible decisions,” Bevin said. “They are not looking at what is best for the child.”

And he’s reaching out to the church to help make it happen.  “Bevin said he wants to find members of Kentucky’s more than 6,000 churches to adopt or become foster parents. He’s reached out to the Kentucky Baptist Convention, the state’s largest denomination with nearly 2,400 churches and 750,000-plus members.”

This is a great example of a follower of Jesus using his abilities to take on the broken things of this world and seek to bring the goodness of the kingdom of heaven into the brokenness.  He’s acting out what Jesus taught His disciples to pray, “Your kingdom come, your will be done, on earth as it is in heaven.”

May God raise up more disciples like the Bevin’s who will work in the church and in their communities to bring the goodness of God’s kingdom into this broken world.