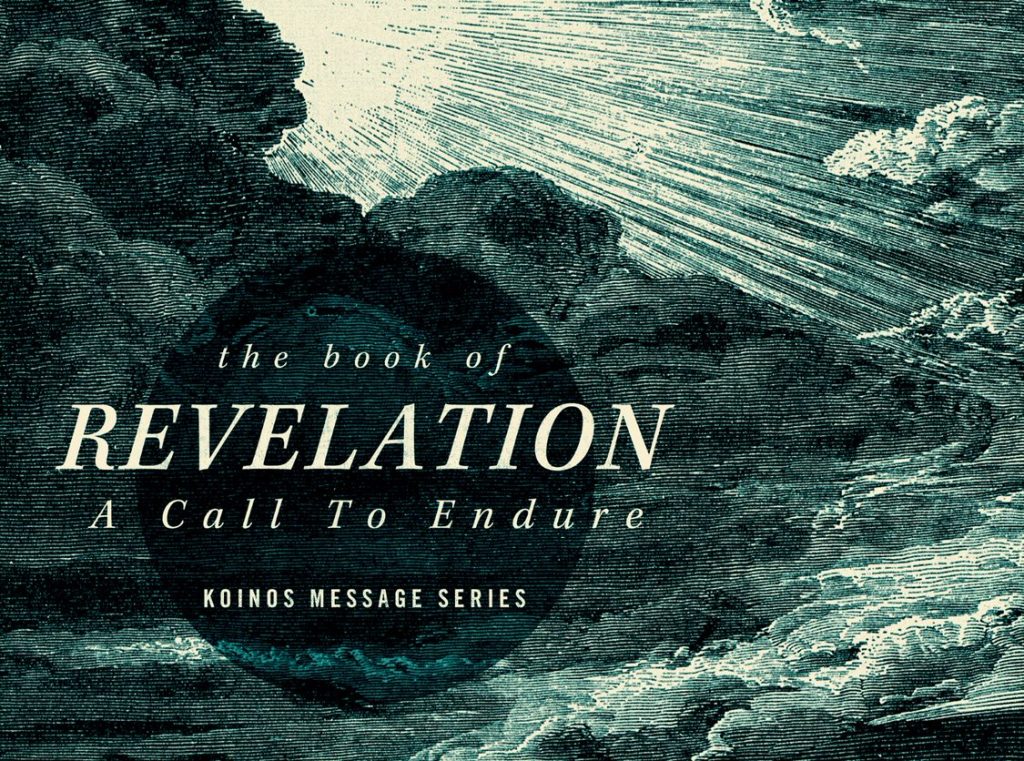 Our Sunday sermon series through the Book of Revelation presents us with lots of things to understand. For many these are things they have never before studied so this can be a challenge. Getting your arms around some key terminology can be helpful.

Keep in mind there are numerous matters where Christians have different views so some of the terms below may be defined a bit differently by others.

Abomination of desolation – An act that is committed of such detestable idolatry that God’s presence, temple and people are deeply defiled. This act certainly was in view when the Romans destroyed the temple in 70 AD and committed vile acts on the altar. It is named in Daniel, the Gospels, and Revelation. (Dan. 12:11, Lk. 21:20, Matt. 24:15, Mk. 13:14, Rev. 13:1-10)

Amillennial view – Belief that the current church age is the millennial kingdom with Christ ruling not on earth but in heaven for a figurative, not literal, one thousand years.  Christ will return at the end of this age.

Apocalypse – An uncovering of the truth about the greatness of Jesus, His eternal plan to redeem the elect, and all that is to take place soon leading to the end and second coming of Jesus. The word “revelation” is used in English versions of the Bible instead of the word “apocalypse”. (Revelation 1:1)

Apostacy – Turning against God, His truth, and His church. There will be a time of exceptional rebellion (apostacy) not long before the second coming of Christ that is brought on by the man of lawlessness. (2 Thess. 2:1-4)

Armageddon – This is the valley below the ancient city of Megiddo in northern Israel (now in ruins). The Battle of Armageddon will take place there, the final battle of Satan’s forces and the “kings of the whole world” against Jesus and His followers on “the great day of God”. Some view this as a symbolic location signifying the final battle. In this battle Jesus will quickly and once for all crush His enemies. After this will come the final judgment.  (Revelation 16:1-16)

Babylon – In the Old Testament this is the city of great corruption and opposition against God. In the New Testament it is the name ascribed to Rome as the center of corruption and opposition against God.  It symbolizes global wickedness that opposes God also described as a prostitute who is the mother of all abominations, and persecutes Christianity so severely that she is drunk on the blood of Christian martyrs. This rebellious city has dominion over the kings of the earth but will be violently destroyed in God’s wrath. (Revelation 14:8; 17-18)

Beast – The Beast is the world ruler who persecutes God’s people in Daniel 7. Some view this as a world empire instead of an individual. In Revelation 13 and 17 the beast persecutes Christians in the lead up to the end of the world and second coming of Jesus.  This figure is thought by many to be the same one who is called “antichrist” described in 1 John 2:18, 22; 4:3 and “man of lawlessness” in 2 Thessalonians 2:3. Satan will give his power to the Beast with the result that all the world will obey and worship him or it. After the final battle he will be thrown into the lake of fire for eternal punishment.

Bema seat – In Roman courts this was the official seat of judgment. This is the judgment that the followers of Christ will go through, not as punishment for their sins since they have been fully forgiven for all sin. Rather this will be a judgment to determine their rewards for their good works. (Rom. 14:10, 2 Cor. 5:10, 1 Cor. 3:13-15)

Chiliasm – This word comes from the Greek word, chilioi, which means one thousand. It was once the name used for the historic premillennial belief held by the early church fathers (and many today) in a literal thousand-year reign of Christ on earth. (Revelation 20:1-7)

Daniel’s seventieth week – In the premillennial view this is another name for the seven years of tribulation. Daniel 9:24-27 describes a period of time called “seventy weeks” which is thought to mean seventy weeks of years (490 years). During this period events will take place leading up to the return of Christ. The last of the seventy weeks is believed to be the great tribulation described in Revelation chapters 6-18.

Day of the Lord – This is a period of time, not just one day, when God’s wrathful judgment comes on the wicked. Old Testament prophets such as Joel, Zephaniah, and Isaiah announced this day would come. It came in their time but only in an incomplete, smaller way. Their prophecy will be fulfilled completely when “the great day” of God’s wrath comes as described in Revelation 6:17 and 16:14 as well as 2 Peter 3:10.

First resurrection – Premillennialists interpret this to be the resurrection of Christ’s followers at the beginning of the millennial kingdom who will reign with Christ. Amillennialists interpret this to be a symbolic way of describing the salvation of sinners. Those who are saved are said to be resurrected from their state of being dead in sin (Eph. 2:1). These who are saved will reign with Christ in the millennial kingdom which is taking place now. (Revelation 20:4-6)

Fullness of the gentiles – This is the completion of God’s plan to save the full number gentiles (non-Jewish people) whom He has chosen to save and bring into the church. After this number of gentiles is complete God’s plan is that “all Israel will be saved” as described in Romans 11:7-32.

Futurist view – In this view the events of tribulation described in Revelation chapters 6-18 will all take place at a time that is still in the future. This is the view held by premillennialists.

Great prostitute – The symbolic image of a prostitute sitting on a scarlet beast represents Babylon the great which symbolizes all evil and opposition in the world against God and His church. She is the mother of all the earth’s abominations and oppresses Christianity so harshly she is said to be drunk on the blood of Christian martyrs. This figure has dominion over the kings of the earth but will be violently destroyed in God’s wrath. (Revelation 14:8; 17-18)

Great white throne judgment – This is also called the “final judgment” which will follow the return of Christ, the millennium, and final battle of Armageddon. At this judgment all humans will stand before the judgment seat of Christ and the wicked (the unsaved, those whose names are not written in the book of life) will be condemned to eternal punishment in hell and the righteous (the saved, those whose names are written in the book of life) will be welcomed into the eternal kingdom. (Matt. 25:31-46, Rev. 20:11-15)

Historic premillennial view – In this view the rapture of the church will not take place until after the great tribulation which means Christians are expected to live through the seven years of tribulation. Following this will be the rapture of the church and then the literal thousand-year reign of Christ on earth with His followers. After the millennial reign there will be the Battle of Armageddon and then the final judgment.

Judgment seat of Christ – This is also called the “bema seat” which is an event different from the great white throne judgment. Here born-again Christians be judged by Jesus, not to determine whether or not they are saved but rather to determine the rewards they will be given for their works. (Rom. 14:10, 2 Cor. 5:10, 1 Cor. 3:13-15)

Lake of fire – Those who are unsaved, those whose names are not written in the book of life, will be condemned to this dreaded place, along with Satan, the beast, death and hades. There they will be separated eternally from God in everlasting punishment. (Rev. 20:14-15)

Man of lawlessness – Before the return of Christ there will be a time of apostacy, a great falling away and opposition against God caused by this man. He will proclaim himself to be God and will take his seat in God’s temple as if he is. It could be that this is the same person as the antichrist. Christ will return and slay him with the breath of His mouth. (2 Thess. 2:1-10)

Mid-tribulation rapture – This is one variation of the views within the premillennial perspective that sees the rapture of the church coming midway through the seven years of tribulation. The second part of the tribulation is seen as more severe than the first and is thought to be the wrath of God, whereas the first half is not. The church will be raptured and spared from experiencing the wrath of God that will come in the second, more severe part of the seven years of tribulation.

Millennium / millennial kingdom – The dragon will be chained within the bottomless pit for a one thousand year period during which Jesus will reign on His throne along with His followers. There will be global peace and righteousness during this time. Premillennialists believe this will be a literal thousand-year reign on earth while Postmillennialists and Amillennialists believe the period of time and the nature of the reign to be symbolic. (Rev. 20:1-3, Isa. 11:1-9).

Postmillennial view – The second coming of Christ will happen after the millennial reign of Christ which is believed to begin soon or may have already begun. There will be such widespread influence of the church and spread of the gospel that most people on earth will be saved and there will be a worldwide golden age of peace and righteousness which will usher in the return of Christ.

Preterist view – In this view the events of tribulation described in Revelation chapters 6-18 have all taken place during or shortly after the first century. This is the view held by those who hold the postmillennial view.

Rapture – This word does not appear in the Bible but comes from the Latin word which means to snatch away. The idea is found in 1 Thessalonians 4:13-18 where the Greek word, harpadzo, is translated as “will be caught up”. Not all Christians hold the same beliefs on this. The premillennial view holds that the church will be raptured either before, during, or following the seven-year tribulation. The amillennial view does not include a rapture at all.

Second coming – Jesus will return to earth to bring an end to the present age and world, judge all people, and bring the new heavens and new earth where His followers will enjoy everlasting life with Him.

Second resurrection – All who are not followers of Jesus, those whose names are not written in the book of life, will be raised from the dead to face the great white throne judgment. They will be condemned to everlasting punishment. All those who are saved will be raised in the first resurrection. (Revelation 20:12-13)