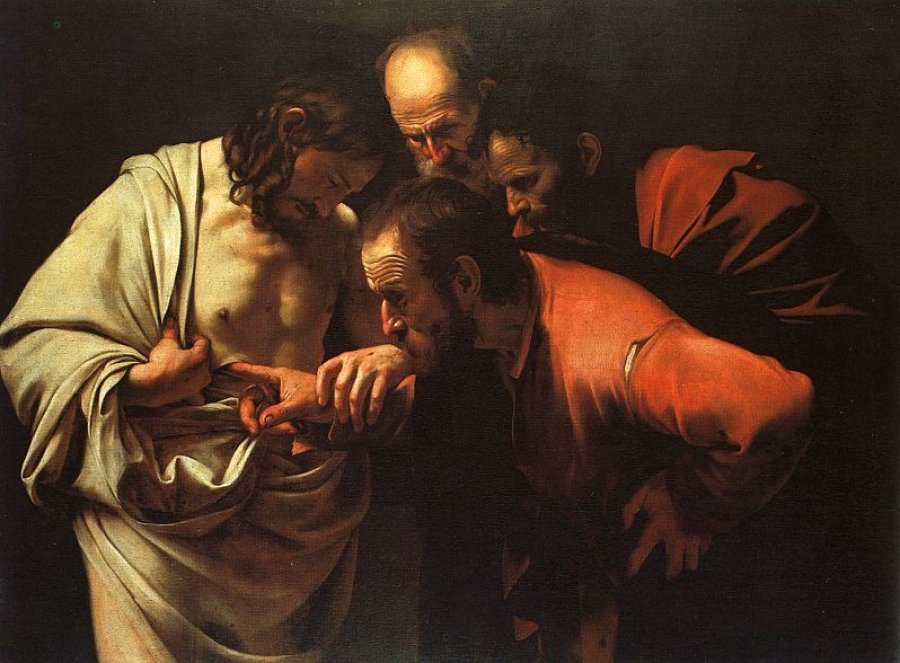 This is The Incredulity of St. Thomas by Michelangelo Merisi da Caravaggio.  It makes you cringe, doesn’t it.  What a self-debasing image, that Jesus would subject himself to such a thing!  How dare Thomas demand it!  Yet it pushes us closer to see the great grace of God toward those who don’t believe.

One of the twelve, Thomas, though he had seen and heard all that Jesus did, still was unbelieving.  John wrote about him that even as Jesus described the plan for redemption and eternal kingdom he continued to question (John 14:5), “Lord, we do not know where you are going.  How can we know the way?”  And wouldn’t you know it, after Jesus rose from the dead, at the very moment when he appeared to the disciples, of all people to miss it, it was Thomas who wasn’t there to see.  So when he hears the others’ report you can tell his doubting continued, “Unless I see in his hands the mark of the nails, and place my finger into the mark of the nails, and place my hand into his side, I will never believe” (John 20:25).

So a whole week goes by.  Lots of people have seen the Lord’s resurrected body; he’s alive.  But eight days of mind-wrecking doubt have kept Thomas from believing.  He still hasn’t seen Jesus.  Then suddenly, Jesus, mercifully does what he always does.  He sought out the unbelieving one, intentionally to reveal himself and remove the unbelief.  John wrote (20:26) that the doors were closed and locked, Thomas was there and Jesus suddenly appeared.  He speaks directly to Thomas, “Put your finger here, and see my hands; and put out your hand, and place it in my side. Do not disbelieve, but believe.”  Jesus lowers himself to the lowest places, allowing the doubting, skeptic actually to put his fingers inside his torn flesh.

That did it.  The doubting and unbelief were gone, “My Lord and my God!” Thomas exclaimed.  Now he sees the resurrected Lord and finally, truly believes.  This is yet another of the glories of the Savior.  He is God.  He’s the redeemer of mankind.  He’s the King of all creation to be feared and worshipped.  Yet he is humble and full of grace.  No one will turn away from their self-engrossed, Christ-denying, unbelieving heart unless their eyes are opened by the Savior revealing himself to them.  This grace-filled humility in the Redeemer seeks out the unbelieving, the unconvinced to show them all that is needed to convince them.  The result is worship.

All who believe and follow Jesus, now, should be filled with worship because “flesh and blood has not revealed this” to them but rather it was done by the “Father who is in heaven” (Matthew 16:17).  And those who do not yet believe should ask the Lord to open their eyes too.

Previous Post: « Jesus, The Savior Who Was Buried
Next Post: 900 Scientists Disagree With Darwin’s Theory of Evolution »