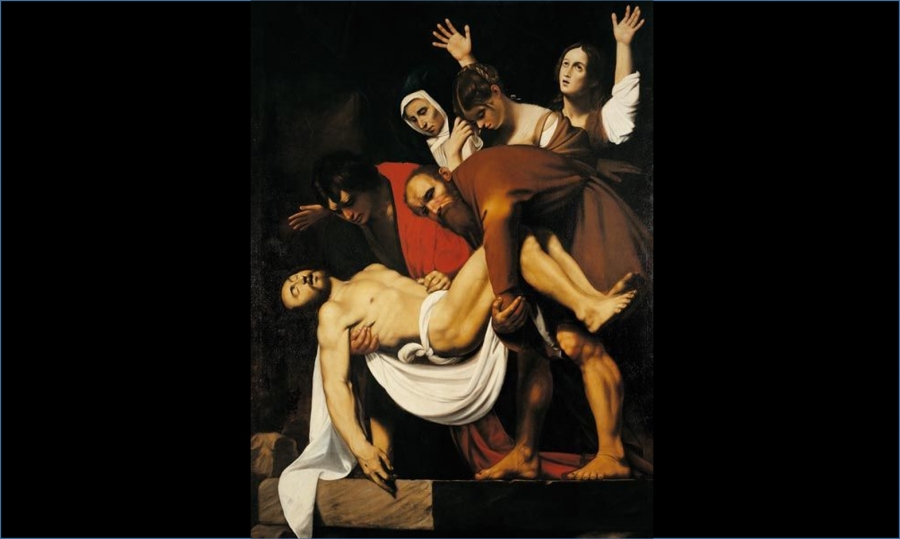 This is The Entombment of Christ, by Michelangelo Merisi da Caravaggio.  The early Saturday morning after they buried Jesus must have been the most desolate and desperate moments his followers ever experienced.  And yet that scene points us to the gospel.

The One who is the hope of the world is dead!  How can things ever be right again?  In God’s good grace He has made a beautiful way, the only way, for people to be made right.  That beautiful way includes a gruesome Friday of death and stunned friends burying their Lord.  It also includes a desolate Saturday that must have felt like nothing in the world could never be right again.

In their desperation the friends were not thinking the storyline of the Bible all the way through.  That wouldn’t happen until later.  But God had thought it through in eternity past.  The entire creation and humanity in Adam’s sin had fallen into desperate fallenness and depravity.  There was no way to ever be made right again.  But the God of grace made the way.  God decreed that a substitute would be slaughtered (the goat in Leviticus 16:15) as a blood sacrifice covering the guilt of sin – Jesus was that substitute.  God decreed that a substitute would have the sins of the people transferred onto it and led away into the remote wilderness carrying sin and guilt far away (the goat in Leviticus 16:20) – Jesus was that scapegoat.

In the desolation of the dead goat’s limp, blood-drained body and the lonely wilderness to which the scapegoat had been banished we find the very grace of God that makes the sinner right.  Sin and guilt are removed so that nothing remains to separate us from loving closeness with our heavenly Father.  In the desolate Saturday with Jesus in the tomb, all that is wrong in me is now in the tomb with Him.  It is no longer who I am.  It is dead and buried.  And I’m a new person in God’s grace.

Do you not know that all of us who have been baptized into Christ Jesus were baptized into his death?  We were buried therefore with him…We know that our old self was crucified with him in order that the body of sin might be brought to nothing, so that we would no longer be enslaved to sin.  For one who has died has been set free from sin.  Romans 6:3-7