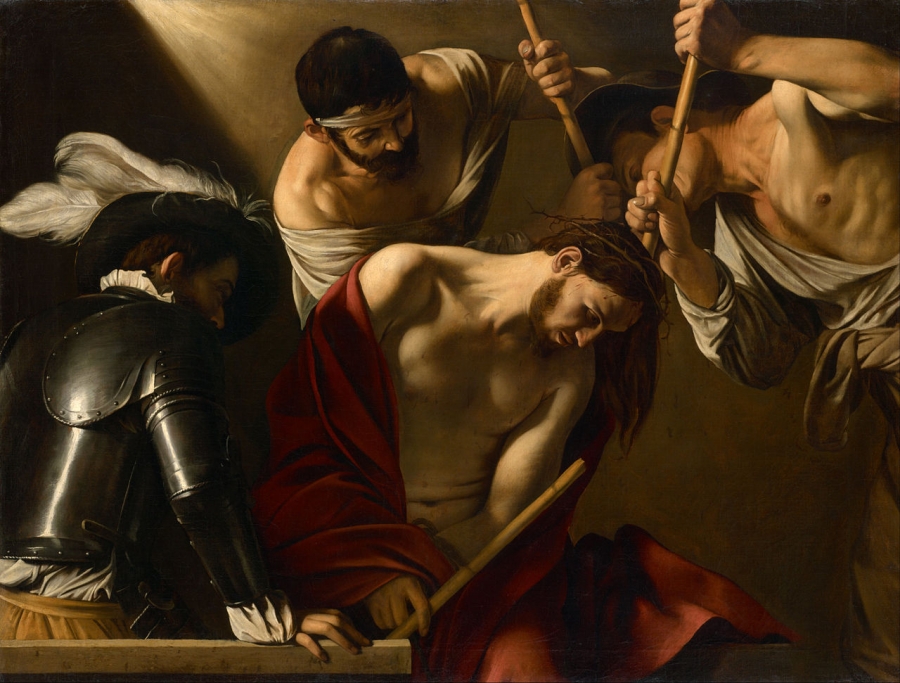 This is The Crowning With Thorns, by Michelangelo Merisi da Caravaggio.  The images of Passion Week easily move us to feel pity for our Lord in His suffering and mourn for Him.  But may these images and words of the gospel move us on to deeper and truer thoughts.

It is after all a pitiful scene, the mocking, spitting, hair-ripping, the beating.  And what a disgusting gesture to jam thorns into Jesus’ head making him look to have a crown – “Yea, right, he calls himself a king.  Some king he is.  We’ll sure put him in his place.”  His limp body, almost lifeless, ashen skin makes you feel death coming.  It is a horrid scene.  It should sadden us.  “He was despised and rejected by men, a man of sorrows and acquainted with grief; and as one from whom men hide their faces he was despised” (Isaiah 53:3).

Pity, however, is not what this is about.  At least not pity for Jesus.  The violent mob had no pity, not the court, not the torturers, certainly not the cheering Lucifer.  But neither did the Father in heaven pity him.  After all he was “stricken, smitten BY God, and afflicted.”  “The Lord has laid on him the iniquity of us all.”  “It was the will of the Lord to crush him; he has put him to grief” (Isaiah 53:4-10).  God did not bring his Son to this scene to solicit pity for him but rather to open our eyes to our own condition so that we pity ourselves.  “Be wretched and mourn and weep. Let your laughter be turned to mourning and your joy to gloom” over your own sins we are told (James 4:9).  And look at the Son with new eyes that now see him as the true God of heaven who looks with divine eyes of pity upon us.  This happened to him because of our sins.

It is in that look of faith upon the crowned Christ that we now find life.  It is new life; His life now living in us that moves us beyond pity on him and pity on ourselves.  If we “mourn and weep” over our own sinfulness, we are promised, “humble yourselves before the Lord, and he will exalt you.”  This scene wasn’t created to leave us in self-pity either but rather to bring us to joy.  The crown of thorns was not his true crown.  He has received a greater and eternal crowning, “God has highly exalted him and bestowed on him the name that is above every name,” “and on his head are many diadems” (Philippians 2, Revelation 19:12).

And he promises that those believing the gospel are no longer crowned with their pathetic sin but also have a greater and eternal crown.  For believers, there is laid up and waiting a “crown of righteousness, which the Lord, the righteous judge, will award to me on that day, and not only to me but also to all who have loved his appearing” (2 Timothy 4:8).