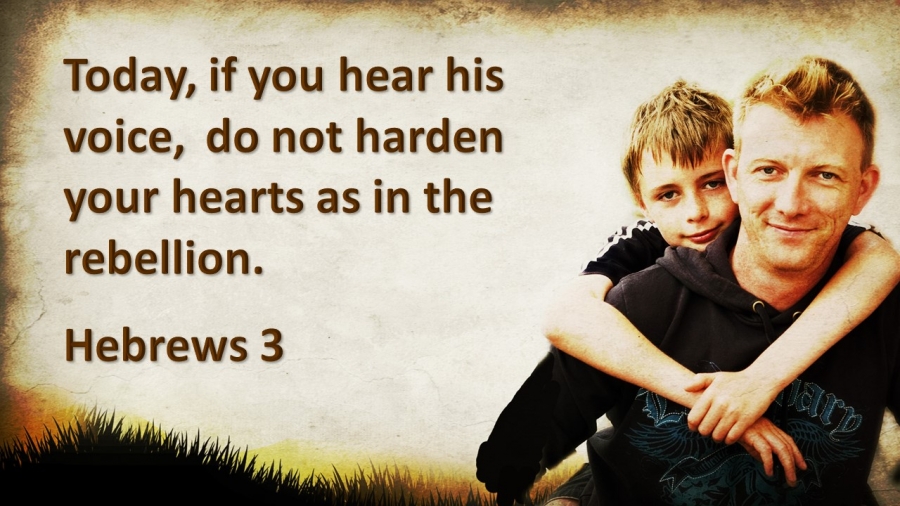 Several people have requested a brief preview on the Sunday message so they will be able to read the text and put thought into it and prepare themselves before hearing it.  I’m delighted to see this kind of hunger for God’s word working in people’s lives.  I need that too!

So here it is.  The text will be Hebrews 3.  The main idea of the text is a sobering warning:  “Do not harden your hearts.”  Please read, ponder, and pray this warning for yourself and our entire church body.  This is very real for many of us.

Here’s the gist.  The Hebrews in the Old Testament refused to enter the promised land.  Remember the story in Numbers 13-14?  God brought His chosen people out of slavery in Egypt promising to give them the excellent land of Canaan, the promised land.  When the twelve spies check things out it is every bit as good as God had said.  But at that moment all but two spies said, “We are not able to go up against the people, for they are stronger than we are.”  All that they knew of God’s power preserving them through every danger suddenly was rejected and they turned their hearts to iron rejecting any suggestion that God would ever do anything He’s said.

These New Testament Hebrews are facing a very similar scenario.  They have become followers of Jesus and are being sent on an even greater conquest, greater than occupying the promised land.  They’ve been sent into the world taking the gospel to call all the nations into God’s greater promised land, the heavenly kingdom.  But they’re beginning to face opposition and hardships so they’re considering just giving up on the whole conquest and stop calling themselves “Christ followers.”

Because of how hard the path was getting, because of how trying the opposition became, because of how appealing it looked to just stop, their minds told them to do exactly that.  The hardening part was rejecting all thoughts of God doing what He said He will do.  Literally they began to think they were in this thing all by themselves refusing to embrace the closeness of the God who walks with them every step.

It’s easy to watch the whole story like a movie from the couch with the remote in our hand and see ourselves as ones who would never do such a thing.  The reality is that every one of us is in danger daily in ways we likely don’t think much about.  Our hardship of being too tired, too discouraged, too …something else, results in us quickly sitting out Jesus’ conquest of the nations and our neighborhood.  “Just hand me the remote and put on another video.”

Many are hardening their hearts against God at this very moment.  Some know it and some don’t.  How can you resist going down the path to a hard heart?  Here’s much needed instruction.  Verse 1, “consider Jesus” – just think of who He is and the power of only one tiny word He might say.  Isn’t He saying something about the path you’re walking down?  Consider that!  Verse 6, “hold fast” your “confidence” and “boasting.”

So spend some time thinking of what it means to “hold fast” your “confidence” and “boasting.”  What other instruction from the rest of the Bible comes to mind as you think about this?