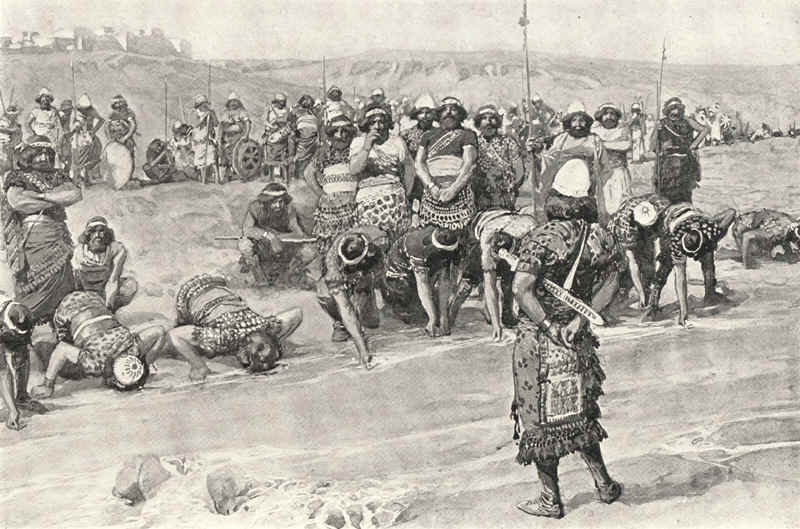 This Sunday you will hear one of greatest stories in the Bible.  Every child loves it.  Adults love it too.  I have all my life.  Please take the time to read it (Judges 6-7) together with your family one day before our Sunday gathering.  Talk about the reality seen in the text that God makes us weak in order to make us strong.

Really?  Does the Bible really say that?  God really makes us weak?  Yes.  We see this throughout the entire Bible.  Just look at the Apostle Paul.  He said, “to keep me from becoming conceited because of the surpassing greatness of the revelations, a thorn was given me in the flesh, a messenger of Satan to harass me, to keep me from becoming conceited.  Three times I pleaded with the Lord about this, that it should leave me.  But he said to me, “My grace is sufficient for you, for my power is made perfect in weakness” (2 Corinthians 12:7-9).  God gave Paul a “thorn in the flesh” to make him weak and humble him.  He made Job weak taking away his wealth, health, and family so that he would see that God, alone, is his greatest treasure.  God made the Hebrews hungry in the Exodus so they would know that God alone is their sufficient supply (Deuteronomy 8:3).

In the story of Gideon, God does it yet again.  When facing an overwhelmingly insurmountable enemy God chooses the weakest one Gideon can imagine to be the deliverer – it’s Gideon!  But God strips down the great army to the tiniest one imaginable, 300 men.  Now that might make you think about the awesome movie 300 and the ancient Greek Battle of Thermopylae.  Leonidas (Gerard Butler) leads 300 mighty Spartans, badly outnumbered, in their epic, suicide defense of the homeland against the massive Persian army.  Though they all die, it inspires Greece to unite and defend itself.  But this is not the story of Gideon’s 300.

This 300 don’t display any epic or heroic feat that makes us all stand in admiration.  Instead God causes the 300 to stand in awe and watch His supernatural defeat of the Midian army of 120,000 plus.  God did it.  They stood there in the darkness of night holding their little lanterns watching.  I’m sure their mouths hung wide open as they watched on the sidelines the mighty army being slaughtered.  God made them weak not to see that they really were strong.  No.  God made them weak to show them they really are weak and He alone is strong.  He will act in faithfulness to keep His covenant with His people.

This applies to our lives in many ways, doesn’t it.  Just imagine all the ways we want to be strong.  Strong financially, strong career, strong opinion in the eyes of others, strong body, strong appearance, strong family admired by all – we want to know that we are good and admired in every way by ourselves and others.  But the book of Judges, and the entire Bible, tells us a different reality about us.  And our own track record tell us a different story about us.  We are not strong.  We are the same as Gideon and his people, continually failing the test.  So God is doing to us the exact same thing He did to them.  He makes us weak so we will see only He is strong.  He makes us hungry so we will know man does not live by bread alone but by every word that comes from the mouth of God (Deuteronomy 8:3).  He makes us poor so we will gain the kingdom of heaven (Matthew 5:3).

This is possible because the King of heaven, Himself, was made weak.  Jesus, the Son of God, “emptied himself, by taking the form of a servant, being born in the likeness of men.  And being found in human form, he humbled himself by becoming obedient to the point of death, even death on a cross” (Philippians 2:7-8).  By His death in weakness He defeated our weakness of sinful depravity.  And by His resurrection in power He makes us strong in Him.  By faith in His weakness His power is made perfect in our weakness.  This is when our overwhelmingly insurmountable enemies become defeated by His power – the habitual sins that we cannot beat, the paralyzing fear that follows us everywhere, the dark cloud of depression that will not lift.

Embrace the redeemer who makes us weak to make us strong in Him!

Previous Post: « Parents, Will You Tell The Next Generation? Psalm 78 (good words from my wife!)
Next Post: Today We Remember:  My God, My God Why Have You Forsaken Me »