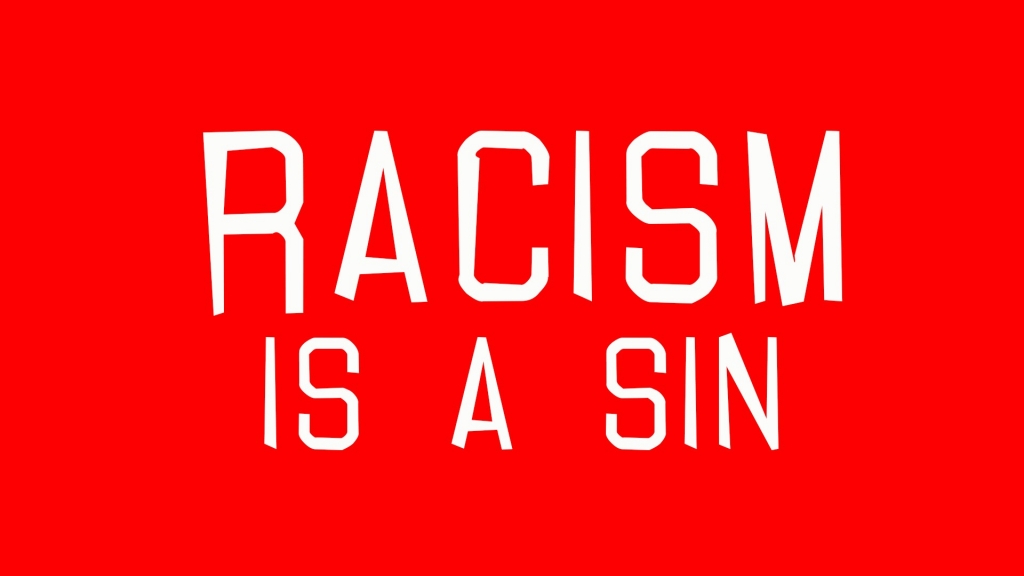 Recently I posted on this blog about the need for Christians to hold firmly to the gospel in all its power, specifically its power to defeat the evils of racism.  (View the original post here.)  In that article I invited readers to ask any question they would like answered related to racism.  Several did and now I will do my best to answer those questions from a gospel-centered perspective.

The first of those questions I want to address is a good place to start.  The question is, “What is the sin involved in racism?”  That’s a good place to start because Christians must be clear in explaining that racism is a violation of God’s law but they must be clear to point out exactly how it is a violation of God’s law.  If it is only bad because certain people think it is bad then maybe believers shouldn’t be so concerned about it.  But if God Almighty declares it to be a sin and condemns it as evil then all believers everywhere MUST make it their aim to wage war against it along with all other sins because those sins are designed to destroy the glory of God and destroy humans He created in His image to live for His glory.

The definition of racism found in Merriam-Webster Dictionary is this:  “a belief that race is the primary determinant of human traits and capacities and that racial differences produce an inherent superiority of a particular race.”  Using this definition makes us see several ways in which this is a sinful violation of God’s holy word.  Here’s how.

The second greatest command in the Bible, according to Jesus, is found in Mark 12:29-31, “Hear, O Israel: The Lord our God, the Lord is one.  And you shall love the Lord your God with all your heart and with all your soul and with all your mind and with all your strength.’  The second is this: ‘You shall love your neighbor as yourself.’ There is no other commandment greater than these.”  That is plain and simple.  A person seeing his or her own race as superior, looking down on others as less important or less than human because of their race (or for any other reason), is the farthest thing in the world from loving that neighbor like loving one’s self.  Racism violates the second greatest command in the Bible.

But violation of the second command also says something about the first command which is to “love the Lord your God with all your heart,” soul, mind, and strength.  The Bible tells us in Genesis 1:26, “God said, Let us make man in our image.”  So to hate or belittle a human being is to hate and belittle the very image of God who made that person in His image.  So racism is a violation of the two greatest commands in the Bible.

But there is more.  In James 2:1 we see the command to “show no partiality as you hold the faith in our Lord Jesus Christ, the Lord of glory.”  Those guilty of racism blatantly disobey this as James says they make “distinctions” among themselves and “become judges with evil thoughts.”  He goes on to say this action is blasphemy against the honorable name of Christ (James 2:7) and violating the law in this one point makes one guilty of violating the entire law of God (James 2:10).  So racism not only violates the two greatest commands in the Bible, it is a violation of every law named in the Bible.

The Apostle Paul, in Ephesians chapter 2, explains how racism is an anti-gospel opposition to the work of Christ in His atonement.  His substitutionary death for sinners gave us the good news that “he himself is our peace, who has made us both one and has broken down in his flesh the dividing wall of hostility” so that now in Jesus all sinners of all races who believe have been made by Jesus into “one new man,” the body of Christ, and “making peace,” “thereby killing the hostility” among all who once hated those of other races.  This beautiful work of Christ’s death for sinners is hated by the one committing racism.  They hate believers of other races, acting as if Jesus didn’t die to redeem them.  And they hate non-believers of other races, acting as if they wouldn’t want Jesus to die for them.  This person is guilty of actually hating the very work of Jesus on the cross, a crime for which the Bible gives a sobering warning in Hebrews 10:29, “How much worse punishment, do you think, will be deserved by the one who has trampled underfoot the Son of God, and has profaned the blood of the covenant by which he was sanctified, and has outraged the Spirit of grace?”

The sin of racism extends even into a hatred of God’s eternal kingdom.  Revelation 7:9-10 describes the heavenly kingdom as a great multitude of people “from every nation, from all tribes and peoples and languages, standing before the throne and before the Lamb, clothed in white robes, with palm branches in their hands, and crying out with a loud voice, ‘Salvation belongs to our God who sits on the throne, and to the Lamb!’”  People from all races will be redeemed by the gospel to eternally give glory to the one who saved them.  But the one committing racism hates the very thing the Son of God died to create, the eternally holy bride of Christ.  This makes it difficult to imagine how one guilty of racism could have any love for or faith in Jesus at all.

Racism is no minor issue.  It’s a major issue.  It is sin of the highest degree.  Christians and their churches should stand against all forms of racism because the gospel of Jesus is the good news that came into the world to destroy it.

Previous Post: « Should Pastors Counsel People To Embrace Their Homosexuality?
Next Post: Which Do You Prefer, Racism Or Church Discipline? »